A Coleraine boy, cream cakes, and an American sergeant.

Ray Barnett was raised by foster parents in Killowen, Coleraine, Northern Ireland, and was a young boy during the war years. He has a particularly fond memory of American soldiers stationed close to where he lived:

“As the war dragged on, the intensity increased. The Americans had entered the fight and now occupied the north coast— guarding the port from German bombers. They also used the area for training and often scaled the rocky white cliffs to prepare for their invasion in Normandy.

American soldiers also filled the streets throughout my neighbourhood. I liked them because they always smiled and waved when I passed them, and not long after they arrived, they held a party for my school class at our church.

My eyes lit up when I saw the cakes and pastries lining the table. These kinds of desserts were a luxury we never had at home and I immediately grabbed one of the pastries and shoved it into my coat pocket.

I turned to see a sergeant staring down at me. I couldn’t tell by his face if he was angry or curious.

“Well it’s mine, isn’t it?” I responded defensively. “I’m bringing it home to my mother because she doesn’t get anything like this.”

The sergeant just looked at me for a minute and then shook his head.

I did as I was ordered, savouring the sugar and pastry dough as it melted in my mouth. Later, when I was getting ready to leave, the sergeant was back. He was holding a box filled with a dozen beauti- fully assorted cakes and pastries.

I loved the Americans after that.” 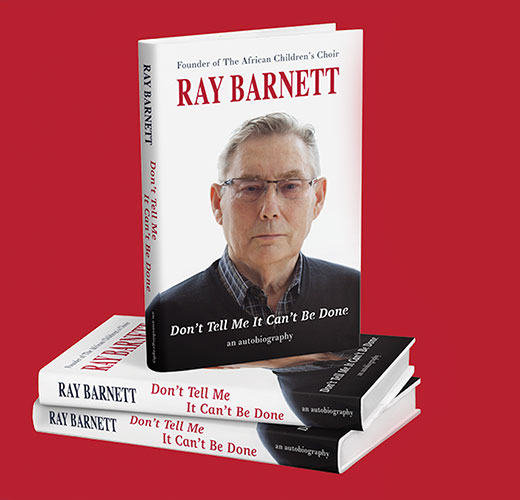 Ray Barnett emigrated to Canada at nineteen and went on to found the world renowned, African Children’s Choir. Throughout his life he has retained a link with Northern Ireland. The above extract is from “Don’t Tell Me It Can’t Be Done” an autobiography of Ray Barnett, available from RayBarnett.com